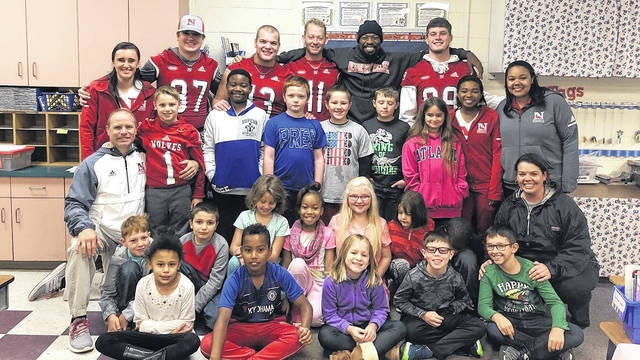 NEWBERRY  - A group of 21 football players, four cheerleaders and two coaches traveled to local schools to read to students in celebration of American Education Week.

April Peel, principal at Prosperity-Rikard, enjoys seeing the connections that the student-athletes form with the elementary school students.

“They do such a fabulous job,” she said. “They keep the students engaged and will do ‘brain breaks’ with them, like little dances to get them out of their seat and moving around. They fit right in with the students and are such a joy to have.”

American Education Week began in 1921 with the intention of “informing the public of the accomplishments and needs of the public schools and to secure the cooperation and support of the public in meeting those needs.” It gives all Americans the opportunity to celebrate public education and honor individuals who are making a difference in ensuring that every child receives a quality education.