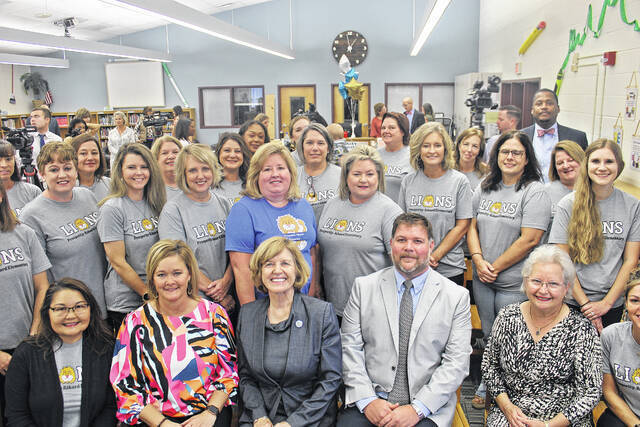 These report cards are an insight into the performance of South Carolina’s public-school students and are the first to contain ratings since 2019. The press conference to release the report cards was held at Prosperity-Rikard Elementary and included guest speakers such as S.C. Superintendent of Education Molly Spearman, Executive Director of the Education Oversight Committee Matthew Ferguson and Newberry School District Superintendent Alvin Pressley. The staff members were gathered in the library to hear the presentation from the speakers, starting with opening remarks from their school principal, April Peel.

Peel began her speech giving thanks to those who came to the conference, as well as some highlights of Prosperity-Rikard’s history and current faculty and student populations. She then introduced the S.C. Superintendent of Education who spoke to the successes that elementary and middle school educators are experiencing throughout the last few years and beyond.

“Statewide, 20.6% of schools in South Carolina received an overall rating of “excellent” on the 2022 report card, which is consistent with the 2019 ratings of schools receiving the highest ranking in the state’s accountability system. We also note that the percentage of students meeting or exceeding expectations increased in both English/Language Arts and math, confirming a strong recovery or our elementary and middle school students,” Spearman said.

Spearman went on to commend the high school educators and students on their equally impressive success.

“On the high school level, this year’s report cards show an increase in the number and percentage of high schools receiving excellent on the graduation rate indicators, which is significant given the number of students who did not return to classrooms when schools re-opened,” Spearman said.

Spearman then expressed to the crowd that while the success is admirable, there were some concerns with the high school students’ performance, as there was a significant decrease in the number of high schools receiving “excellent” ratings on the report card. She also spoke to the need to close the widening gaps between the highest and lowest performing students on all levels.

After Spearman expressed her appreciation for the low teacher turnover rate at Prosperity-Rikard and spoke on her ongoing commitment to seeing student’s success and recovery as the fallout from the pandemic wanes, she spoke to the ultimate indications of the School Report Card and then introduced Matthew Fergusson to speak.

“As we release the report cards today, we point to a tremendous opportunity that it presents. Though the results we see are expected following the pandemic, state education leaders are no less concerned about drops in assessment scores. We are already seeing the promising signs that students are recovering and we ask for the public’s support and partnership,” she said.

Fergusson took the stage and thanked Peel for hosting the conference at Prosperity-Rikard. He then went on to speak further to the merits of the report card data and his shared plans for positive growth.

“This is real growth with the students and our mission that is worthy of celebration. South Carolina is pleased to be moving toward this new growth measurement and future accountability system. We want to acknowledge schools like Prosperity-Rikard that are realizing these goals even before they count on a state level,” Fergusson said.

“I have to commend our school board who decided early on that some of our students were not responding to the virtual classroom. They made a commitment to getting us back to face-to-face instruction so that we can give our students what they need each and every day. I am super proud to be the superintendent of the school district of Newberry County,” he said. “So once again, I commend the faculty, staff, and administration at Prosperity-Rikard Elementary.”