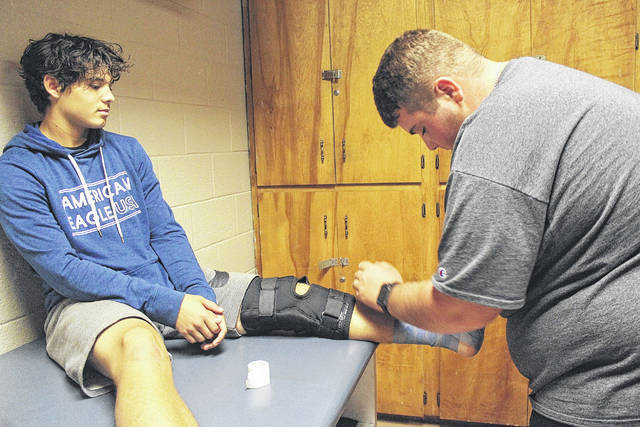 The game will be on Dec. 14 at Myrtle Beach High School.

Boozer has been involved with athletic training at NHS for the past four years.

“I’ve always been around football because my dad (Art Boozer) coaches and Athletic Trainer Caitlin (Hart) came up to me and said ‘can you help me out,’” Boozer said.

He jokingly added that Hart told him to help and that he didn’t really have a choice.

“He runs out on the field with me so that’s something he gets the privilege to do — he’s the one, if I tell him to make an ice pack, wrap it on them, make a compression wrap. He can really run the show if I couldn’t — legally he couldn’t, because he’s not certified, but figuratively speaking he really could,” Hart said. “He knows where everything is, where the supplies are in the athletic training room. He knows what to do if somebody goes into shock, cardiac arrest — so he’s the one running on the field with me and gets to watch all the evaluations.”

While at the All-Star game, Boozer is looking forward to meeting new players, coaches and other athletic trainers from around the state — he said hopefully they won’t see too many injuries.

“It’s going to be a busy week for him. They’ll be getting up at 6:30 a.m., practice two days, like two times a day, which we don’t do here at Newberry and I’m thankful for it — that’s something new he’s going to experience. Maybe more accustomed to what collegiate level looks like because that’s how they’ll run the week — like college works,” Hart said.

Boozer said he hopes to represent NHS well and that, “it’s an honor and privilege to be able to do this.”

He also expressed his thanks to all of the people who helped him get to where he is today.

Hart added that with Boozer being selected to represent NHS, will set the standard for other students.

“I think a lot of people don’t realize what, as a student athletic trainer, you can do. So not only can you be chosen for North/South, but they also have them at the Shrine Bowl — they have scholarships that they can apply for. So I think as high school students, it’s hard to realize as an athletic trainer, because you have to have a Bachelor’s degree to even practice it, but there are things to set them up to be able to go to college and help them further their education in athletic training,” she said.