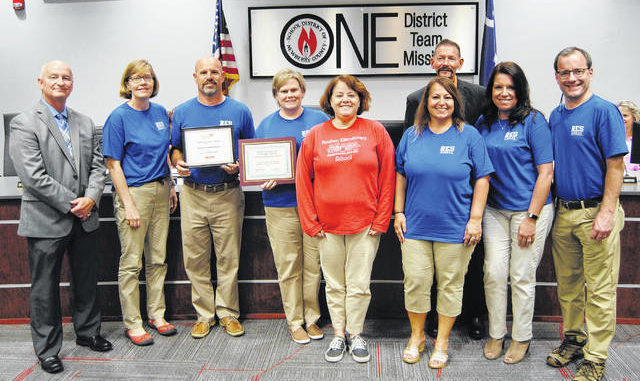 NEWBERRY — Four Newberry County schools received the Healthy Schools Award as given by the South Carolina Healthy Schools and Communities Program during the October School Board meeting.

“The Alliance for a Healthy Generation Healthy Schools Program is one of the largest wellness programs in the country. We have approximately 45,000 schools across the country participating and approximately 1,000 schools in South Carolina enrolled,” Berry said. “When schools receive our national healthy schools award, it is a prestigious achievement demonstrating that these schools have implemented best practices to implement a healthier learning environment for students and staff. They have done this through school meals, getting students more physically active, outstanding P.E. and health programs and addressing staff wellness.”

In other business, Cathy Meetze addressed the Board over the need for an auditorium at Mid-Carolina High School.

“Several weeks ago, I attended a Beta Club induction, at that time there was no seating for the handicapped. That is totally unacceptable, I’ve spoken with Mr. Cooper and he was very apologetic,” Meetze said. “It is my feeling that Mid-Carolina High School needs an auditorium.”

Meetze said several years ago, when the new building was being constructed, there was to be an auditorium. However, due to overages to costs it was cut.

“Mid-Carolina High School needs and deserves to have an auditorium, other schools have this,” she said. “If it had an auditorium with proper seating, it would’t have been an issue. It is unfortunate they went over budget because of the hurricane and high prices at the time.”