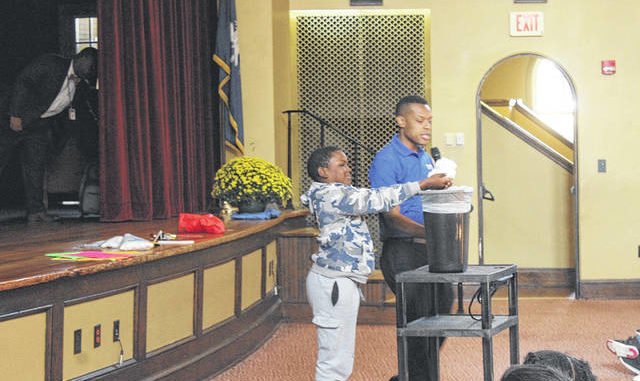 NEWBERRY — Dominic Brown, WIS chief meteorologist, spoke to a room full of third, fourth and fifth grade students at Newberry Elementary Tuesday about what his job is like as a meteorologist.

Before diving into his work as a meteorologist, Brown told the students a story about his name, which is pronounced like “Dennis (Dominic) the Menace.”

Brown told the stations no — his name is a family name (named after his father).

Brown, a Georgia native, has been a meteorologist for almost 12 years. He graduated from the University of Georgia with a journalism degree and a Master’s degree from Mississippi State University in geosciences/broadcast meteorology.

Brown showed the students the newsroom, control room, audio room and pictures of what happens behind the scenes, such as anchors standing on boxes to appear taller.

Students were surprised to learn that Brown, along with the other anchors/reporters, have to wear makeup.

“The lights are so bright it can create a shine on your forehead and shadows on your eyes — I have to wear makeup. My mom had to teach me how to put on makeup,” Brown said.

He told the students about what the difference was between a tornado watch versus a tornado warning. A watch means that conditions are favorable, to keep watching the news and they will continue to give updates on a potential tornado. On the other hand, a warning is the most dangerous — when a tornado has been detected and viewers need to take action immediately.

Some of the places to take cover, as told by the students, include a closet, hallway, basement or bathroom (pipes will help protect you).

“The balloon will pop, could potentially land on someone’s head. You pick it up and mail it to the National Weather Service,” Brown said.