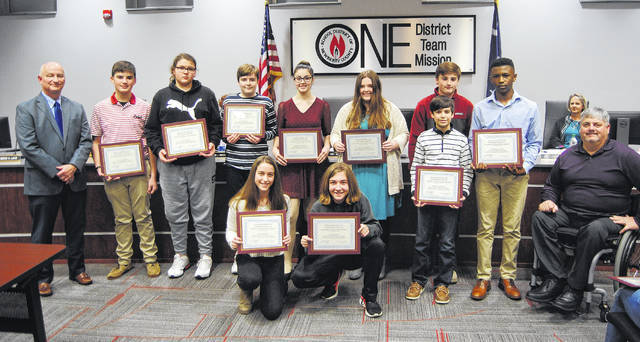 “There were over 4,000 students at this year’s convention in Myrtle Beach celebrating the theme, ‘Betas as far as you can see.’ MCMS Beta Club brought home 11 state awards and a state officer. They all received an award and an invitation to Beta Nationals this June in Fort Worth, Texas. We also want to give a huge thank you to the sponsors on helping guide the club to success,” Ware said.

According to Dr. Lynn Cary, assistant superintendent for curriculum and instruction, in preparation for spring high school registration, they wanted to ensure the board saw an up-to-date, comprehensive list of elective courses that require local board approval.

“Beginning in 2015, we made this an annual practice to better inform the board and also address any new courses that the secondary schools would like to add to their elective offerings,” she said.

Cary said the local board approved courses have not changed from last year. A few examples of these courses include, Best Sellers, Broadcast Journalism one, two and three, Current Issues in Science, Leadership, Military History and Robotics.