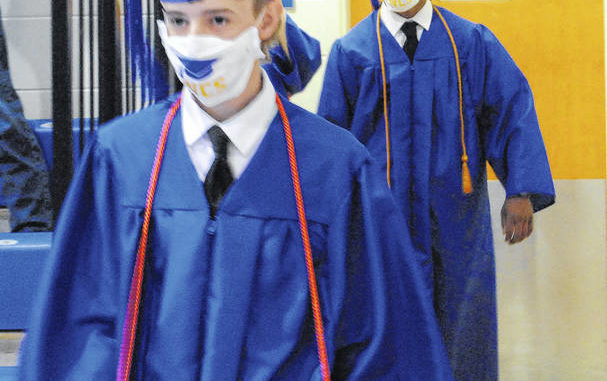 WHITMIRE - When life hands you lemons, make lemonade — that is what Valedictorian Caleb Bowers told his classmates during the Whitmire High School graduation, following what one could only say is a unique senior year.

“I know this has been an eventful year and definitely a difficult end to our time in school. What do you expect from a generation of students who were born around the time of September 11, 2001, we know how to do it right,” Bowers said. I want to start off by saying I have learned several things during this time in our lives.”

The first thing Bowers learned was life is not fair, he said he has heard many people say this is not fair, they’ve missed sports seasons, proms and all other festivities.

“True, it is not fair, but life is not fair,” he said. “I have heard many say we are missing out on the greatest times in our lives. I hope that this is not all there is to it, I hope that we each have milestones that we will not miss, such as college graduations, careers, families and many other events.”

History is marked by generations who have experienced hard times, Bowers said. Bowers’ great great grandmother had three sons that fought in World War II, he said it was not fair, but life is not fair. He said he had family members who graduated high school and shortly thereafter received letters that their service was needed to fight in the Vietnam War.

“I know many of my friends and classmates have missed out on their final season of spring sports and I hate it. Remember that many people have missed seasons and some have even lost scholarships in times passed due to injuries — it was not fair, but life is not fair,” Bowers said. “I could go on and list other times of unfairness, which you can name your own event and add the phrase, life is not fair.”

Other generations have answered the call and did what was necessary to move forward and build successful lives for themselves, their families, towns and the nation, Bowers said.

Bowers said they have witnessed people hoarding food, toilet paper, hand sanitizer and cleaning supplies. He said many disabled elderly people have had to do without needed items due to the selflessness that some displayed.

“Take this opportunity to help our fellow man, to pull them up and to help one another,” he said. “My great grandfather lived through the great depression and World War II, he did not come from a wealthy family. What he would remember were the times his mother would provide bread or beans or a place to sleep to starving families. He said we looked out for one another because at the end of the day, that is all any of us had.”

Bowers said they need to take that advice as the future leaders of churches, communities, the state and the nation.

Bowers also learned that fear will paralyze you and make you act irrationally.

“I hate to say it, but we are faced everyday with things that can kill us or make us very sick. I am bewildered by folks hoarding supplies and not willing to share. All of this has been caused by fear,” he said.

Bowers was reminded of a quote from President Franklin Roosevelt, “the only thing we have to fear is fear itself.”

“We cannot allow this pandemic to cause so much fear that we are paralyzed and prone to inaction, we should see this as an opportunity to better ourselves, our families, our communities. We must move forward and live our lives,” Bowers said. “I am not saying to be foolish, continue to wash your hands, don’t lick a grocery cart, don’t drink Lysol — instead use some common sense.”

Bowers said if you need some good common sense advice, look at 2 Timothy 1:7, “for God has not given us a spirit of fear, but of power and of love and a sound mind.”

“To the class of 2020, my hope to you is that you realize life is not fair; however, life is what you make it. Don’t allow fear to rule your life, instead use common sense and remember the old adage — when life hands you lemons, make lemonade,” he said.

During Trenton Thompson’s Salutatory Address, he said the past few months are probably not what any of them were expecting, but they made it regardless.

“This is our first step out into the real world, I wouldn’t be where I am if it wasn’t for my teachers and family,” he said. “Thank you to all the teachers that helped me when I didn’t understand something, thank you Troy, who stood by my mom’s side when I wasn’t there, but most importantly, thank you Mom for everything. You are the most important person in my life and thank you for pushing me to get me where I am today.”

Thompson said that his classmates knew him as a man of few words, so he left them by saying, “a Wolverine never quits, so never stop moving forward through life.”