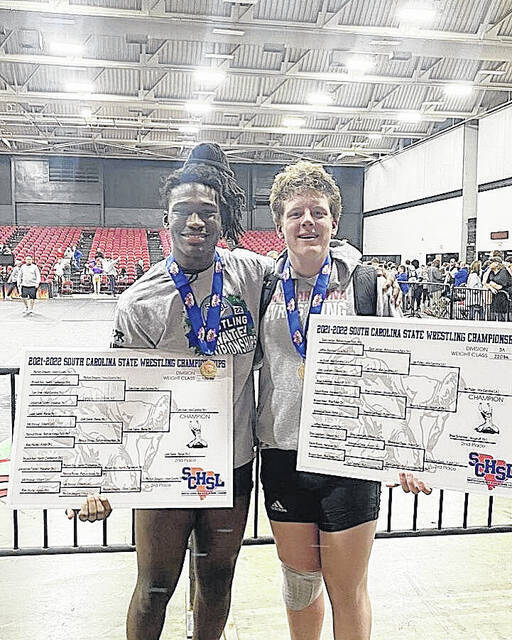 Cam Grier (195) and Ian Pullen (220) both won in their respective weight class over the weekend.

Head Coach Carlos Hernandez said Grier was ready for anything thrown at him at the tournament.

“He’s been understanding his mistakes from past matches and in the end, it all worked out for him. Being strong from neutral and bottom, we knew he had to use his strengths against his opponents. It all played out in the end with dominating wins in his last two matches at the State Tournament,” Hernandez said.

While playing for Mid-Carolina, Grier attends Newberry High School. Hernandez said due to NHS not having a head coach and a low number of wrestlers, MCHS decided to take them into their program so they could have a season.

As for Pullen, Hernandez said he is a very coachable athlete.

“He is always asking questions and always working hard at every practice. I knew his work ethic would show out this season and that it did. He is someone to give his all and to not give up until the final whistle, which is what got him the win at State,” he said.

Grier and Pullen were not alone at the State Tournament, three other MC wrestlers also qualified.

Johnathan Hicks ended in fourth place in the 170-weight class.

“A state qualifier returner came up short this past weekend. Even though everything didn’t go as we thought they would, he (Hicks) still gave a good fight to his opponents. Having them go to the wire and then some,” Hernandez said.

“Jon has been pushing past his limits this entire season. It’s one of the reasons he qualified for the tournament. He is a very technical wrestler and uses that strength in every match. In the end, it wasn’t enough, but he still gave a great performance in his matches,” Hernandez said.

Dalton Woolstenhulme ended in fifth place in the 138-weight class.

“Dalton Woolstenhulme is a determined athlete. He is always looking for the smallest mistakes his opponents make and uses their mistakes against them. He has pulled many upsets this season and he will be someone to be reckoned with in the future. He may not have won, but this experience will only make him better,” Hernandez said.